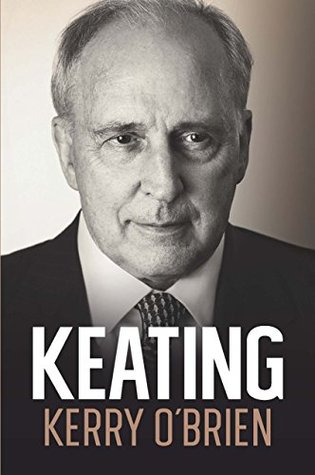 Paul Keating was Prime Minister of Australia, during the most significant period of political and economic reform in the history of Australia. Twenty years later, there hasn’t been an autobiography published, and Keating has never spoken about this period. There has been no memoir from this ex Prime Minister who was always considered to be a supreme political storyteller.

This book fills that gap. Well known journalist and TV interviewer, Kerry O’Brien knew all the players, lived the history and has spent many hours with Keating teasing out the stories and testing his memories.

The result is this great book of anecdotes, insights, reflections and occasional admissions from one of the most loved and most disliked political leaders in our time. The format of this book is question and answer interview style.

I first came across this book when I attended a session at The Bendigo Writers Festival, where Kerry O’Brien was discussing his book Keating, which had only recently been published. I attended this session because I was a fan of Kerry O’Brien but I never expected to read the book as I thought it would be too political and too heavy for me. But after hearing O’Brien speak, I couldn’t wait to get started.

Even though Keating is based on politics, it isn’t a dry text book type read as the style is very conversational. I really enjoyed reading Keating‘s view on events that occurred during his time as Prime Minister and the preceding years.

I remember Paul Keating as being a colourful character with a wonderful way with words. He always seemed to be able to cut his opponent in half with his words.  I love to see old footage of him when he was speaking in Parliament. If only politicians today were so clever with their words.

I did love this book, and I felt it was my privelege to read it. Despite it’s many pages, once I started reading, I coudn’t put it down. It was both serious and very humorous. I was surprised to read that this great, seemingly confident leader suffered with his own insecurities and moments of doubt at times. As well as delving deeply into events during Keating’s time as Prime Minister, this book shows a human side to the man that little is known about.

Kerry O’Brien is one of Australia’s most respected journalists, with six Walkley awards, including the Gold Walkley and the Walkley for Outstanding Leadership in journalism. In a 50 year career, he has worked for newspapers, television, a wire service, and as a foreign correspondent.

Thirty three of those years have been at the ABC, where he was the host of many current affairs programs including Four Corners. He has interviewed most of the influential leaders of his time including Nelson Mandela, Barack Obama, Mikhail Gorbachev, Margaret Thatcher and Tony Blair. He was a press secretary to Prime Minister, Gough Whitlam, in the early days of his career.

Published in 2015 by Allen & Unwin
794 pages including notes, photos, sources and a comprehensive index